Tonight, country music stars Sugarland will air a live-streamed concert from New York City as part of the AmEx Unstaged series. 100% of the ticket proceeds go to an organization of the artist's choice. Jennifer and Kristian have chosen Thistle Farms!
The show will air at 9pm ET/6pm PT (that's 8pm for everyone in Nashville!) on Sugarland's VEVO channel, straight from NYC's Best Buy Theater into your living room.
Thank you, Jennifer and Kristian, for this great gift and we wish you luck tonight!
at 10/18/2010 09:32:00 AM No comments:

As we reported before, Belmont University’s Students in Free Enterprise (SIFE) team were the champions in Atlanta for the SIFE USA Regional Competitions.

This month, they took 3rd Place in the SIFE World Cup! Belmont represented the United States in a competition where students were judged on the business projects they developed to bring about positive social change in their communities. 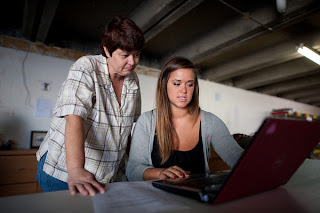 One of Belmont SIFE’s projects involved working with Thistle Farms and students provided computer and financial training for the women in the program.
Congratulations to all of the participating students!
photo by Michael Krouskop
at 10/13/2010 12:01:00 PM No comments:

According to the October issue of the Nashville Scene, the Thistle Farms Lip Smoothie is Nashville's BEST LIP GLOSS of 2010! 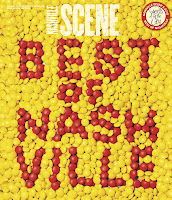 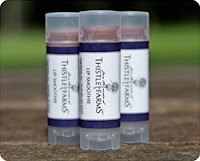 Thanks, Nashville Scene and everyone who voted! If you haven't tried out our creamy, shimmery, buttery pomegranate treat for your lips yet, you'd better get on it before the winter wind hits. You can find it online or at some of our favorite retailers in Nashville which you can locate HERE.
at 10/08/2010 09:17:00 AM No comments: 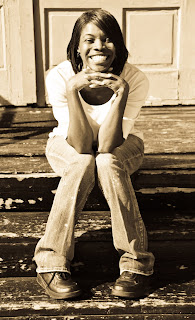 Tracy's smile can light up a room. Her compassion and perseverance are innate qualities that were never squelched despite the hardships she endured while growing up in public housing in Nashville with her parents and two younger brothers. Her first experience of a relationship was watching her Dad abuse her Mom and cheat on her with other women. “I thought that’s what love was,” Tracey says.

Eventually, Tracey’s Dad left the family and Tracey began acting out by drinking, smoking marijuana and being promiscuous. When her youngest brother was killed in a drive-by shooting at age 13, Tracey’s grief-stricken mother started using drugs as well. Their now-shared habit only pushed Tracey and her mother further apart.

At 17, Tracey dropped out of high school and in a short time she had three children. Her drug use escalated when her curiosity and feelings of abandonment led her to crack cocaine. “I remember seeing a woman I knew always laughing and seemingly happy and I wanted to feel the same way. She told me, ‘I’ll put it down and if you pick it up, you’re on your own. I don’t want anyone to say I got you started.’ That was my first experience of smoking the pipe and it took me on a loop where I could have never imagined it would take me.” 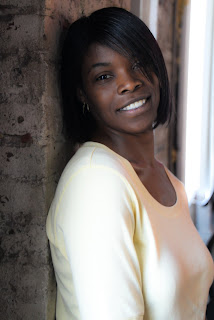 To afford her habit, Tracey got into a cycle of prostitution and selling drugs for nearly 16 years. Becca Stevens, the founder of Magdalene, talks about Tracey in her book, Hither & Yon:

“One evening, in a haze outside of a crack house, a horrible scene unfolded. In a midst of a fight, a man was shot and she was charged. After living in the Magdalene community for almost a year, the woman was charged with second degree murder. At her sentencing, she was surrounded by a community of women who had lived with her and helped her fight her case. The judge ruled that she would serve no time. He sentenced her to eight years of probation and allowed her to live another year in Magdalene, in a home that is striving to show that love is the most powerful force for change in this world.”

Tracey has been clean since October 2004, is a graduate of the Magdalene program and is the Manufacturing Manager at Thistle Farms. In addition, she is the Supervisor for Housekeeping at TPAC, lives in her own apartment and is a grandmother of three. 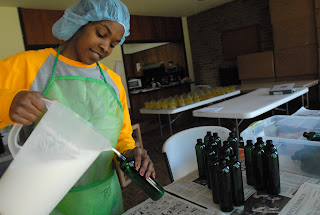 She says, “I love my life today. I try not to beat up on myself. I’m doing the best I can in whatever I’m doing. I’m grateful to have gone through what I had to in order to get where I am today.” She is a gift to all people that need to remember that we can all find our way home.

Email ThisBlogThis!Share to TwitterShare to FacebookShare to Pinterest
Labels: Graduate, women behind the products

HCA's Caring for the Community Campaign 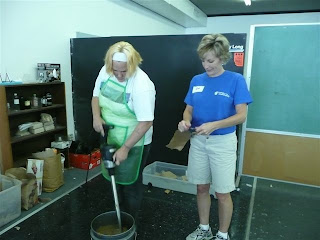 September 23rd, a group of volunteers from the HCA (Hospital Corporation of America) came by to assist with making thistle paper, as part of their Caring for the Community Campaign. They have been dedicated volunteers for several years and we are thankful for their service to our community. Special thanks to Kathi Whalen for her help & dedication! Here are some comments from volunteers that day (note: photos do not correspond to comments):
Participant 1: It’s one thing to read online about an organization that doing good things – it is truly another to see it in action. The time spent yesterday with a few of the women of Magdalene was priceless and has touched my heart. They have faced what must have seemed like an impossible journey of turning their lives around, leaving behind self destructive behaviors and learning life skills that I have taken for granted. The support program provided by Thistle Farms and the Women of Magdalene is truly life saving. One of the women thanked us yesterday for helping to “save her life." She’s been sober for 6 months as of last Friday. She most likely has no idea that she may have ignited the very spark I needed to address my own self destructive addiction to sugar and processed foods. I am hopeful that by sharing her story with us, she may have just saved my life as well. 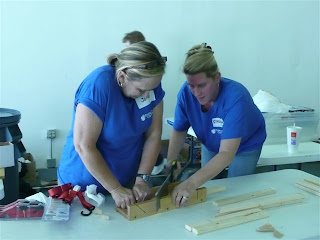 Participant 2: Those women were bright and hopeful and seem to look to each day as one that surely will bring something else good to their lives. That is a gift they have won through lots of trials and tribulations. When I think of my own charmed life and the things that I too often consider to be “problems” that get me down, I am simply ashamed of myself after meeting those women yesterday. They helped me think of my own situation differently and they really taught me a lot about life and how to face each day, just in those short moments here and there of sharing their stories. I have never faced anything nearly as difficult as they have, but deep down we are all the same and I just know that in a different time or place, I could be just where they are. I hope that if it were to happen to me I would face the future with the grace and courage that I saw in their beautiful faces yesterday. 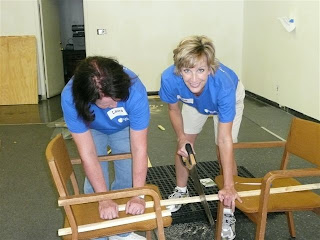 Participant 3: Volunteering at Magdalene/Thistle Farms was such a personal and rewarding experience. This organization has such an inclusive, well-rounded program to minister to these women. They not only meet each one’s need for a safe place to live, food and clothing but they go deeper to provide emotional, psychological and spiritual healing necessary for these women to truly turn their lives around and discover who they are and the purpose God has for their lives. By teaching them work skills and work ethic, the women gain confidence, self-esteem and feelings of self-worth.
I had the opportunity to talk with several of the residents as we were working...One stated “I now have my own apartment and another responded “I now have my own house.” I said “That is awesome. What a fantastic accomplishment.” The response I received was a huge smile stating “Yes it sure is and we are thankful to God for the opportunity we have been given.” I immediately knew how much I take for granted in this life. 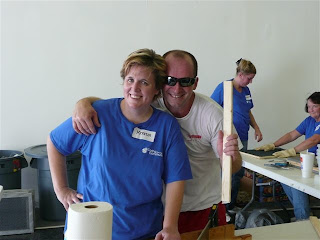 Participant 4: Working at Thistle Farms was an eye opening experience for my husband and I. My husband is not from America, but this past year he has seen how helping out in the community brings out the best in people. He was really touched as was I by the organization and the people it serves....We take classes to learn about diversity and I can say that yesterday’s experience was more beneficial in diversity education and humanity than any class available. This was definitely for me and my husband one of those cases where you can say you walked away with more than what you came. Our mission was to give back to the community but I think we can all agree that we walked away with more than we could ever imagine. Thank you all so much for such a great experience.
Story and photos compiled by
Kathi Whalen
Nashville, TN
at 10/06/2010 08:43:00 AM No comments:

Following is a beautiful piece written by Elena Miranda from New York City. We are grateful for her words and photographs.
Lunch was over and it was time to return to the LCUSA Assembly meeting room. I was photographing the 2010 Assembly for the Ladies of Charity and I wanted to be ready for the afternoon session. I noticed a new table was being set up in the hallway area outside the meeting room doors. I glanced over at the beautiful packages and smiled at the women setting up the table. I didn’t really notice what they were selling and I continued on my way thinking, “Oh, that’s nice, a vendor.” I got my two cameras ready and waited for the meeting to resume. I was up in the front to get a shot of the past president as she introduced the next speaker, Rev. Becca Stevens. Becca was sitting up by the podium but she stepped down to address the LCUSA from the floor. My connection to the LCUSA is both professional and personal and so I was moving around taking photos and listening at the same time. 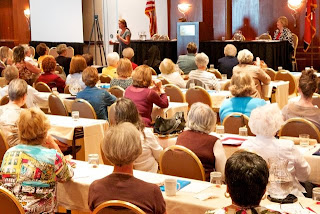 “Love Heals at Magdalene” was powerful, moving, inspiring and funny. Becca Stevens’ message, “that in the end, love is more powerful than all the forces that drive women to the streets,” became real to the audience when she introduced one of the graduates from Magdalene.

I got a few shots of the speaker and then stopped to listen. I was moved to tears as she shared her personal story of tragedy and triumph. Other women stepped forward from the back of the room to join her, all graduates of Magdalene. They told a little about themselves and then took questions from the floor. The women then spoke of Thistle Farms and the skin care products they produce, market, package and sell to help support their program. That vendor table with the pretty packages outside the meeting room took on a new meaning to everyone in the room.

Becca Stevens and the women of her program finished their presentation to a standing ovation from the Ladies of Charity. I followed them outside and went over to the Thistle Farms table before the meeting was adjourned. I wanted to make a purchase and help support the program in my own small way. As soon as a break was announced, the LCUSA members mobbed the Thistle Farms table. 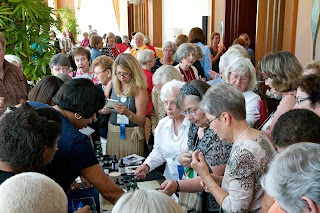 The Ladies of Charity, women of faith and love, were obviously very moved by the story of love, kindness, compassion and triumph that is Magdalene. Their response to Becca Stevens and the graduates of Magdalene was tremendous. There were many smiles from both sides of the table that day. Becca Stevens is right; there is nothing more powerful than love. 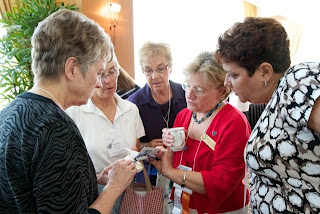