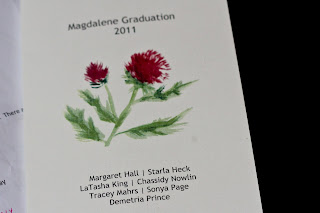 Last week, we celebrated the graduation of seven incredible women from the two-year Magdalene program. We are so proud of each of these ladies and are blessed to be a part of their journey.
Introducing the 2011 Magdalene Graduates: 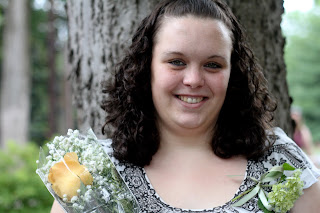 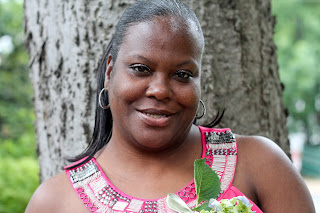 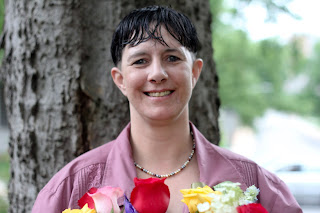 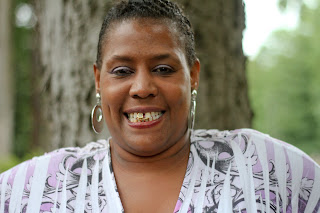 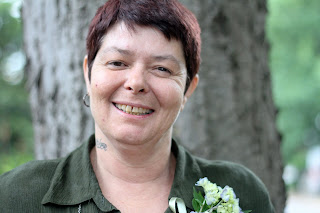 Margaret (Penny) Hall
Not pictured (but with us in spirit!):
Starla Heck
Demetria Prince
We are especially grateful to our friends at St. Bartholomew's for their beautiful spread of food and all of the families and friends who came to celebrate with us.
And we leave you with a prayer from Magdalene founder, Becca Stevens:

Our hearts are full at every Magdalene graduation. They are full of joy for all the graduates, full of prayers for women still suffering on the streets and in the jails, and full of thanksgiving for all those who helped bring this day into fruition. Our hearts our sated today with pride for the seven women who have completed the two year program. They are an unbelievable class of women. Graduation seems like it only take a moment, to walk down the aisle and shake a hand. But it comes from the same root word as gradual. Graduation is a slow process. It is a walk not a run, and there are no short cuts to the aisle. Graduation is the slow miracle of new life taking root and blossoming through seasons and hard work. When we are busy, doing what we are called to do, graduation comes before we know it. And then when its over, we head out back into the world to work in love to help others graduate. This is a beautiful day in the life of Magdalene and in the lives of all the graduates. Our hearts are truly full.

We are so grateful to our Nashville community for their continual support, especially when they surprise us with their generosity. Below are a few stories of some of our friends who recently showed us extra special love right in our own neighborhood.
Belmont University presents a annual award called the "John Williams Heart of Belmont Award," which recognizes a student who demonstrated "advocacy for change that enhances the lives of those in the community." The recipient of the award splits their $500 check with a charity of her/his choice. This year, the award when to Hannah Delap, who chose Thistle Farms as her charity. Cynthia went to the awards ceremony and accepted the check on behalf of Thistle Farms. Thank you so much, Hannah! 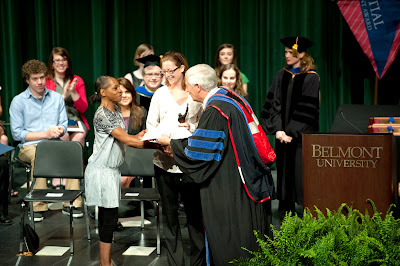 A group of women from St. Paul's Episcopal Church in Franklin participated in the Country Music Half Marathon. Along with sponsorships from friends, families and other church groups, the ladies ran/walked (using the catchy tag line "Miles for Magdalene") and raised almost $3,000 for our organization. You are all truly amazing! 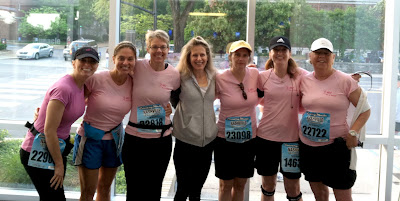 Just down the street from the Thistle Farms sales and manufacturing building, The Real Life Players presented their teen owned & operated play, Stranded, at the Darkhorse Theatre. Thistle Farms was chosen as one of three charities to receive the funds from the door of the three-night play. With thanks to those who went to the performances and voted for us, we received the most amount of votes, with an impressive 44%! What a blessing. 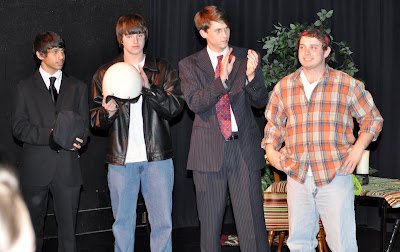 Are you a Thistle Farms community supporter? If so, tell us how! We love to see our friends show us love and we hope to give love right back. Email carolyn@thistlefams.org to share your story of generosity.
at 5/23/2011 10:21:00 PM No comments:

Get To Know Jennifer 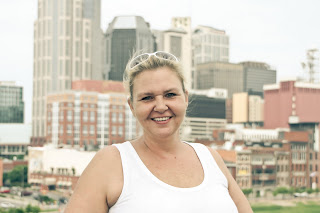 When someone calls Jennifer’s phone, a song plays in place of a ring. “I love music!" she says with joy. She exudes that same joy as she recounts her heartbreaking and hopeful story.

Jennifer is the youngest of 12 children from Dayton, OH. She attended a Catholic school and church and, although her family was active in parish life, her father was a violent alcoholic who, when was he around, would use physical abuse as a form of discipline. She also remembers her uncle sexually abusing her when she was young and in seventh grade, she beginning smoking marijuana. Within a couple years, Jennifer started frequently running away from home.

She was heavily involved in the "sex, drugs, and rock and roll" scene. She met a man, and when she was only 17, was married and pregnant. Although she didn’t use drugs during this pregnancy, as soon as the baby was born, she picked up where she left off. Jennifer's drug use escalated to include cocaine and heroin. 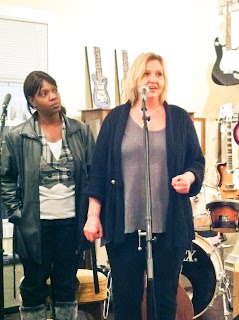 She worked in a “massage parlor” and eventually resorted to street prostitution to fund her drug habit. She said she was “spiritually broken" and used to cut herself. At her lowest point she remembers her ex-husband putting her head through a widow after a heated fight. Jennifer knew she had to find a better way of life.

Returning to her Catholic roots, she went to confession and told the priest her story. The priest, a recovering alcoholic, told Jennifer he would help her find a recovery program. After she left confession, she told her sister the news, but said, “I need at least two years, and it needs to be in another state.” The very next day, the priest called to tell her about Magdalene – a two-year program in Tennessee.

Though there was a two year waiting list, Jennifer was persistent and called Magdalene everyday. After only two months, a bed was available and Regina Mullins, Magdalene’s Outreach Director, called and asked “when can you get here?” Jennifer moved to Nashville last May and became a resident. In September of the same year, she started working at Thistle Farms where her specialties are making thistle paper, hand soap and candles. 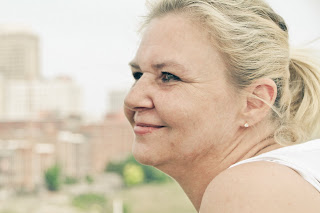 Jennifer thanks God for giving Becca Stevens a vision and for Becca having the courage and strength to see it through. Jennifer says Magdalene works because “you get to work at your own pace. They keep loving you until you love yourself and they’ve shown me that love really does heal.” For new women entering the program, Jennifer says, “welcome home. Take a deep breath, relax and know this is the first day of the rest of your life.”

Email ThisBlogThis!Share to TwitterShare to FacebookShare to Pinterest
Labels: women behind the products

How To Get Through Airport Security Quickly This Summer

School is almost out and summer is around the corner, which means one thing: VACATION TIME! Our Travel Survival Kit is the perfect accessory for your skin while you're away from home. 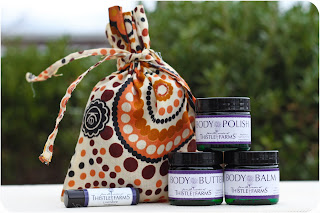 Our Travel Survival Kit is airport security-friendly because it features 2 oz. sizes of your favorite body products: Body Polish (an exfoliant perfect for shower time or a quick mani/pedi), Body Butter (a thick moisturizer after your shower), Body Balm (to smooth out the rough spots), and a Lip Balm (in four delicious scents or unscented) -- all tucked into a vibrant, colorful drawstring bag handmade by women of Lwala, a community alliance in Kenya. Not only are you supporting women in Nashville by your purchase, but you're also supporting women on the other side of the world!
In addition to summer fun, the kit also makes a great gift for a graduate or a teacher. Purchase the kit online or stop by Thistle Farms and meet the women behind the products.
at 5/09/2011 10:25:00 PM 2 comments: