MEET KEITH URBAN (and help out Magdalene in the process!)

in concert on his "Escape Together World Tour"

This is an incredible opportunity to meet one of today's hottest country acts and donate your money to a worthwhile organization.
Click on Keith to bid directly on tickets and passes to his show
AND
click on the ebay giving works logo to check out other fantastic auctions coming up soon! 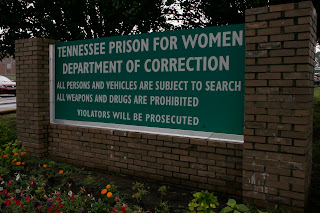 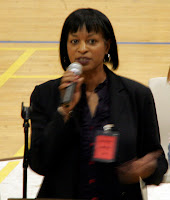 Yesterday, some of the Thistle Farms / Magdalene community spoke at the Tennessee Prison for Women Department of Correction in Nashville. Dorinda Carter, the Communications Officer of the facility and a Magdalene Board Member, arranged a gathering to share stories and selections from "Find Your Way Home."

It was an emotional day for one resident of Magdalene who had been released in February. Even though she has two years of sobriety, when she passed through the metal doors into the razor baled enclosed lawn, she had to take a deep breath. She then said, "as long as I can get back out today, I'll be ok."

Six women from the Magdalene community shared pieces of Find Your Way Home with the women of the facility, including "Remember You Have Been In The Ditch" and "Forgive and Feel Freedom."

Singer/songwriter Marcus Hummon and Mercury Recording Artist Julie Roberts provided musical entertainment with songs like "Angel From Montgomery" (covered by Bonnie Raitt) and the Marcus-penned "Bless The Broken Road." Becca Stevens, the founding director, offered a sense of hope on a dark and stormy day. 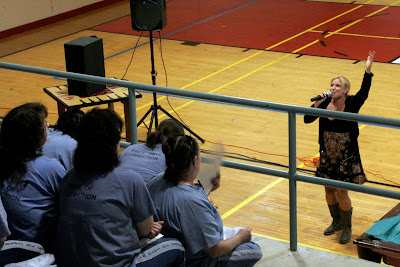 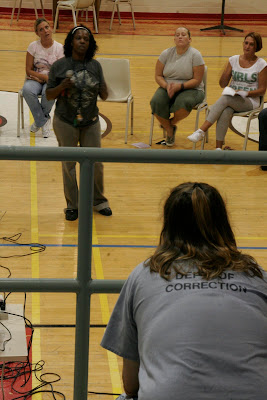 Speaking directly to the heart, from the heart 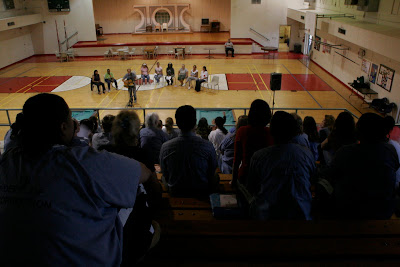 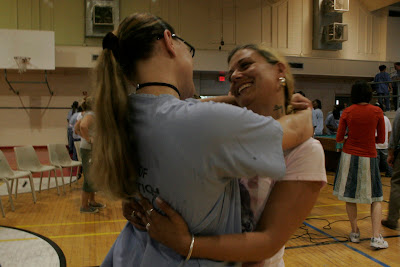 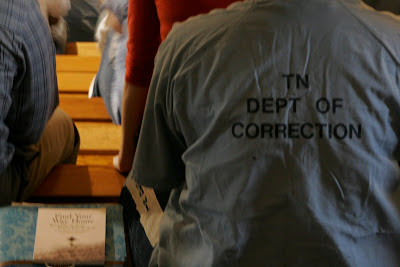 Email ThisBlogThis!Share to TwitterShare to FacebookShare to Pinterest
Labels: prison 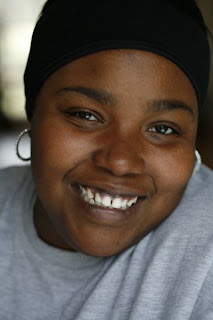 Demetria grew up in Nashville, TN as the youngest and only sister of 5 brothers. From early as she can remember, Demetria was repeatedly abused by a family member. When her mother discovered what was going on, she sent the family member away, moved the rest of the family to another residence and continued on as if nothing had happened. Not talking about the issues at hand and constantly moving when things got uncomfortable would be the model that Demetria would learn to live her life by.
In 7th grade, with financial troubles at home looming, the shooting of a family friend, and an introduction of a stepfather and stepsister to the family, Demetria began rebelling. By the 10th grade, she was in fights, drinking, smoking marijuana and eventually dropped out of school. At 16, Demetria tried cocaine for the first time and was thrilled by the way it took her out of body. Soon after, she discovered she was pregnant by her boyfriend, three years her senior.

When Trae, her son, was four months old, she began using on a regular basis. Once she discovered she was pregnant a second time, she fell into a deep depression and continued drinking and doing drugs throughout her pregnancy and after the birth of her second child, Brandon. She was constantly high and says regrettably, “I don’t even remember when that boy started walking.” 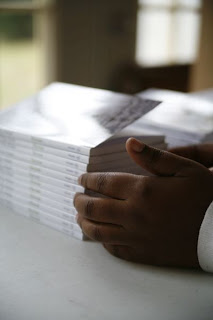 Three years later, Demetria had her first daughter, Gabby, followed 16 months later by her daughter, Dasha. Gratefully, all of Demetria’s children were born healthy, but because traces of cocaine were found in Demetria’s system, she was required to enter various treatment programs in order to retain custody of her children. Though she would be clean for months at a time, she would fall back into the vicious cycle of addiction and realized she simply could not stop.

She remembers the night one of the women came to get her and bring her to Magdalene. “It was 9:30 at night and I had just gotten through using. There was a knock at my door and I knew what she was there for. She said, ‘you have 15 minutes to decide what you’re going to do – are you going to stay or are you going to go?’ And with no hesitation – it wasn’t even me that said it – I said, ‘I’m gonna go.’”

Making a real attempt to get clean, get her life together and be a better mother to her children, she entered Magdalene in October 2008. She is now in therapy and says “it’s been hard as hell. What I’m going through in therapy is the stuff you would have seen me running out the door from because I don’t want to feel it. But I’m doing something different now.” 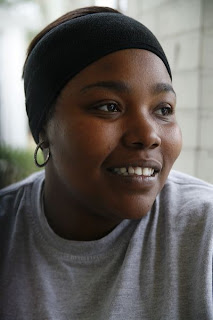 Last month, Demetria began working at Thistle Farms and is quickly on her way to joining the sales team. With a huge smile and infectious laugh, she is a natural and makes others around her feel immediately comfortable. She says, “God was carrying me and is still carrying me now.” Her words of wisdom to a newcomer are: “It’s not going to be easy, but just hold on and if you need someone to lift you or just someone to hold you, I’m there.”

Email ThisBlogThis!Share to TwitterShare to FacebookShare to Pinterest
Labels: Residents, women behind the products

After featuring our graduates in another post, we received an overwhelming response to see more photos from the joyous day! Following are some of those sweet memories captured. 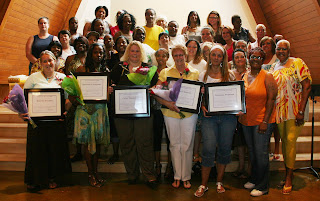 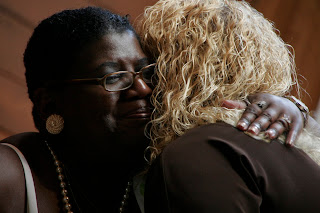 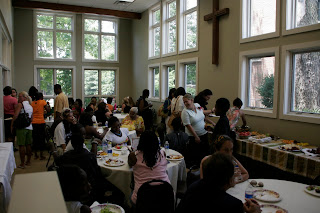 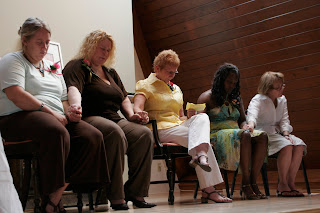 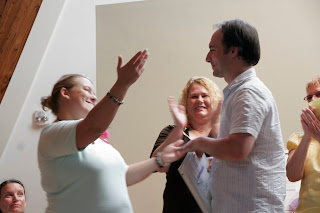 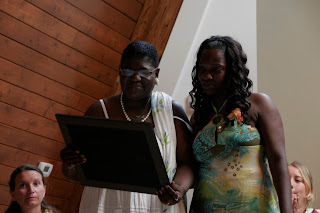 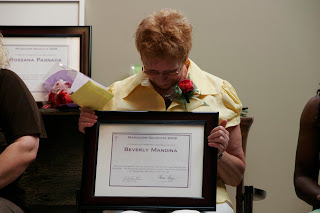 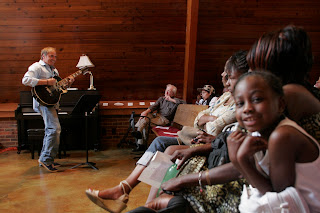 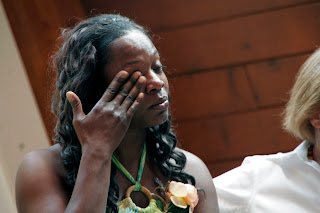 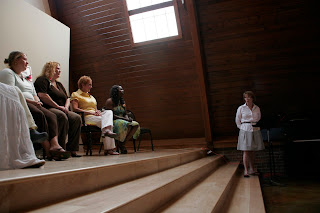 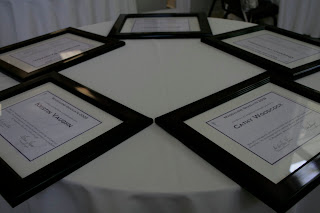 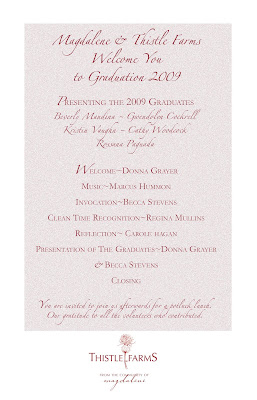 The first day of June marked the beginning of a new era for five women who celebrated their graduation from the two-year Magdalene program. With music provided by singer / songwriter Marcus Hummon, the ceremony reflected the women's successes, struggles, heartaches and triumphs. 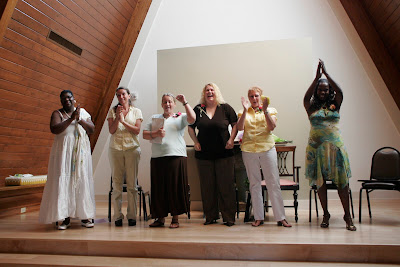 "When given the honor of speaking today, it came with one commandment.
Thou shalt not use the words:
I, me, these women, they and them.

You might be thinking this restriction is a strange request, but in truth,
it makes perfect sense.
The pronouns are divisive, separating us.
The story of the women of Magdalene is our story. The tragedy is our communal tragedy. When one woman suffers, we all suffer. When one woman is brutally ravaged, we are all brutally ravaged. Injustice is universal; it not only belongs to us, it crushes the shoulders of the world.
We are all pieces of a giant tapestry, a continuum that was begun so long ago in Genesis, in the beginning. This human tapestry grows as we are interwoven in our different shapes and radiantly different colors. Some pieces are fragile, torn, marginalized. Some are ripped from us. At times we attempt to complement each other in accord. Eventually, we may come to realize that alone our part is just a minute fragment, a mere thread, that we can only be whole when we embrace each other in the circle, bound by human kindness. Only then will our tapestry become the sacred work that it was meant to be by our Creator."

And with no further adu, may we present the 2009 Graduates of the Magdalene program: 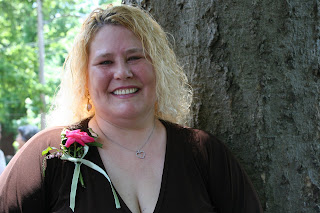 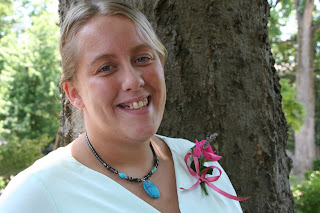 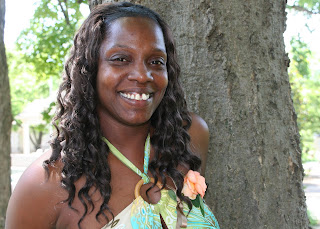 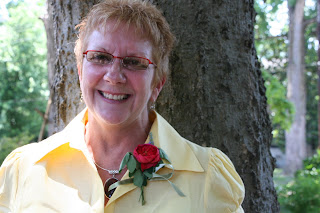 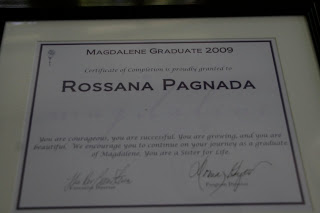 Rossana Pagnada
(not present, but here in spirit) 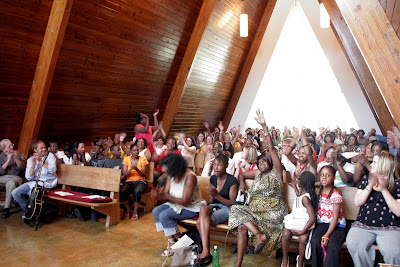