Shelia, Dorinda and I had a great intro meeting with the six new residents of Magdalene on the Inside. We talked about our first meeting with the first residents of Magdalene in 1997 and how we could never have imagined how that community could grow and blossom. The conversation flowed easily between past fear and shame to future hopes.  Women teared up most as they described what it means to be open to healing. We began with writing the word "sanctuary" and as we talked one of the women sketched a beautiful thistle under the word. 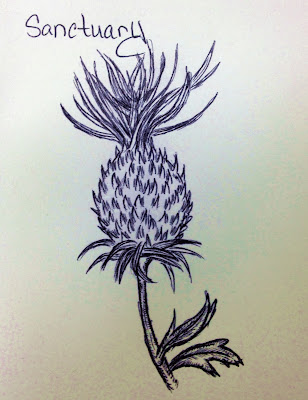 There is so much work and we all made a commitment to dig deeper than the taproot of a thistle to get to the roots of what lead to the streets and the foundation of love. Everyone also committed to not talking with other inmates about what a woman says in the circle and what bonding with one another might look like. We told them that they were now considered six new residents of the program, that they would get a small stipend and that we would write to them and have a place for them when they were released. There is so much work ahead and we need volunteers to help with things like the Christmas party Shelia has planned and scrapbooks for Christmas. Clinicians from the Rape and Sexual Abuse Center are coming to help weekly and residents will write to them over the next few months. The program is planned for three nights a week for two hours at this point. We are brainstorming about how we can make some arts and crafts to be used to help raise money for this prototype for community inside prison. I remember the first time we had a conversation about it was after visiting a women's prison in Texas when we saw a women that had deep ruts in her cheeks and tears flowing like a stream through them. It was a visual of how lonely and scary a place it can be and we talked afterwards about what it would be like to try and create a sanctuary with a very small group of women inside. I love that its coming to life.

Email ThisBlogThis!Share to TwitterShare to FacebookShare to Pinterest
Labels: Becca Stevens, Magdalene On The Inside