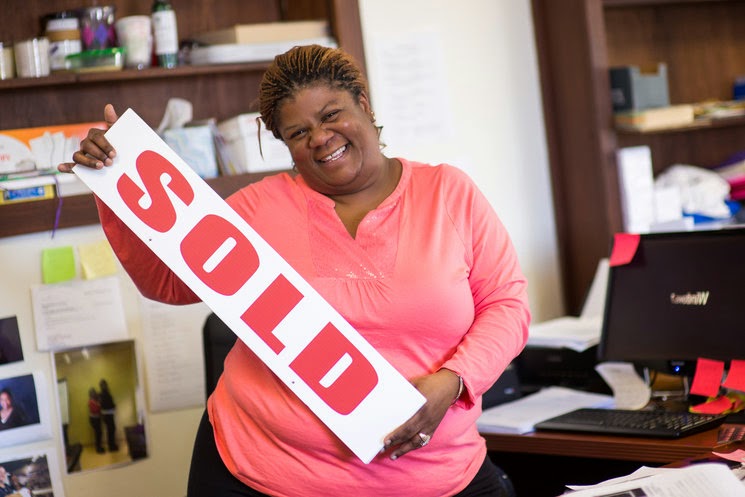 Life at Thistle Farms is made up of small victories, from recovery anniversaries to new jobs and promotions. For Chelle, a 2005 graduate of Magdalene and Thistle Farms Administrative Assistant, her newest victory is becoming a homeowner.

When Chelle went to the bank to get approved for a loan, she wasn’t thinking she would really buy a house. She knew her credit had improved greatly over the last few years and she just wanted to see if she could get approved. There were a few bumps in the road, like an old student loan that had been paid off but was still on her record, but Chelle knew her credit was good. A few month before she had applied for a credit card and been approved. “I knew I was growing up and my credit was climbing,” she said. When she was finally approved her first though was to tell them no, she didn’t want it. The thought of being a homeowner scared her. It was such at big step. But she knew she was growing up, and growing up met taking big steps.

Chelle spent eight weeks searching for houses. “I didn’t want to rush the process, I didn’t want to end up with something I hated.” The house Chelle fell in love with was not as new as she was hoping (built in 1953) but it had been recently remolded and had a huge back yard, which was what really sold her. Chelle has three children between 6 and 14; the thought of having a big backyard with a back deck was more than enough for her.

The process between when Chelle started the paper work for the house to become hers and when she actually closed on it was the most stressful few weeks of her life.  “I really thought I was going to wake up one morning and someone was going to yell ‘psych!’” But no one came running around the corner to tell her no and before she knew it Chelle was the owner of a house. “I have moved so much. With my addiction I just kept moving. Putting down roots is another step in the healing process.”

“I still don’t feel like the house is mine,” Chelle said a few days before moving in. “I think I am still in shock.” In shock or not everyone at Thistle Farms is excited for Chelle and her family. They are putting down roots and growing together in ways they never thought possible.