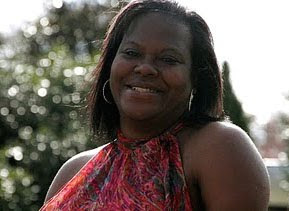 Tasha is the youngest of 11 children. Her mother passed away when Tasha was 13. Tasha remembers being unable to process this tragedy with her siblings, who were busy with their own lives, or her father, who lived across the street with his new family. It was this event that she feels was a catalyst to men who introduced drugs into her life.
At 16, Tasha found herself pregnant. By 19 she had three children and was selling marijuana for money; and by 26 she had smoked crack for the first time and was hooked. During her addiction her kids moved in with various family members, she lost her apartment and ended up on the streets with her boyfriend.

Over the years Tasha moved back and forth between Knoxville and Nashville. At various times she would try recovery, but nothing worked. Tasha's niece, who had gone through the Magdalene program, put Tasha's name on the waiting list for a bed at Magdalene. After five years, and more stints in jail, a spot opened up for Tasha.
First, she went to the safe house for three months and entered Magdalene in October 2008. She began working at Thistle Farms in February 2009.
Tasha says, “I thank God and Becca for this program. I never thought I would be at this point. I wanted my life back. I promised God that by the time I turn 40, I’d be off drugs and have a good husband. I don’t have the husband yet, but that’s ok, because this year I will turn 40 in June and be two years clean in July!”

Tasha has been writing to a woman in prison from the Find Your Way Home Prison Tour. She says that the correspondence has been inspiring to her. To that woman and to new women in the program, she says, “I can open up and tell them, ‘once you give this a chance, you realize you are in the right place.’ I know I couldn’t handle this life without putting my spiritual life first.”

Email ThisBlogThis!Share to TwitterShare to FacebookShare to Pinterest
Labels: Residents, women behind the products